15 years ago Tunkey Winkey was built.
14 years ago I bought Tinkey from a used car dealership in Salt Lake City Utah.  I was the second owner and have been the proud owner ever since.
Today Tinkey drove it's 150 thousandth mile.
Yup. The odometer turned to 150 000. 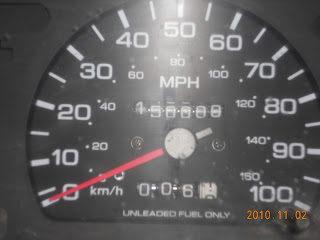 It was hard to get a good picture of it. I pulled over to the side of the road to take the shot. The flash kept wrecking the shot but when I turned off the flash the photos were coming out blurry. I must have tried about 15 times. My son, who was with me, said,"what you doing?" I told him I was trying to get a picture but it wasn't coming out how I wanted to which he replied " Do you need to go home and get other mommy to do it?" I explained I couldn't drive back because the number would change and I wanted the number right there - that was why I stopped. He then suggested "may I help you?" I asked how he could help me and he said " I take picture with my DI" - his Nintendo DSI which DOES take pictures. I said ok, that he could help me, he took a picture on his DSI and then said "We go now mommy, my friends at school already."
Well PARDON ME!
I am just loving how much he is growing and he makes me laugh everyday with the things he thinks of.
But back to Tinkey.

Tinkey is an important part of the family. We have had Tinkey a long time and had a lot of memories in her. Mukiwa was just a baby and went in Tinkey EVERYWHERE for her entire life. I taught my little sister Jill how to drive a stick shift in the parking lot at Weber State in Tinkey. 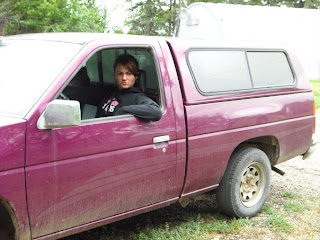 Shel and I have camped in Tinkey, gone to drive in's in Tinkey and travelled ALL over in Tinkey.
Max and I drive to school in her every day and one of Maxie's first words was "winkey". Now it is one of  CJ's first words.
We love you tink! And we hope to drive you for another 15 year and another 150 000 miles!
Posted by JCB at 2:54 PM