When I registered for the stats course this semester I spoke to the professor prior to classes starting and we discussed how many classes I would attend.
I had tried to do the course by correspondence and it just didn't work for me and so I knew I needed to be in class as often as possible.
Driving from my home to where the class was offered meant driving through the Pine Pass. In September and early October we knew that this would not be a problem, but from mid October the potential existed that driving through the pass would not be a good idea. We left it "open" to discuss as the weather permitted, how many classes I would attend and what accommodations we would make down the line if needed.
Well the weather has been really good. This past weekend was the second last time I had to make the drive and for my final exam I will stay at home and use a proctor for the exam.
I drove to class in fantastic weather, the sky was clear, it was sunny and the roads were great. 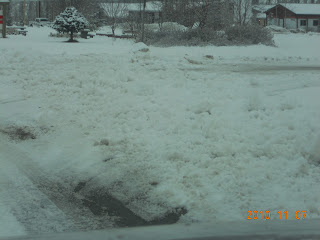 A day and a half later I started home. I started home in the rain and the weather got worse and worse and worse every kilometer that passed. I drove at about 40 km an hour for at least four hours. Once I get into the mountains there is no cell phone service and of course - I was wearing my Birkenstocks and a sweatshirt. I had NO desire to end up in the ditch - or worse. 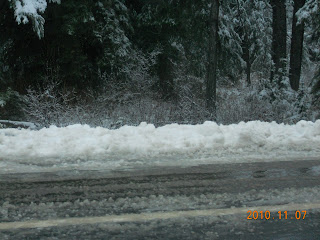 The drive was horrendous, but I made it home safe and sound - and I only have one more trip to make! I will keep a close eye on the weather, if it like that again there's no way I'm driving it! 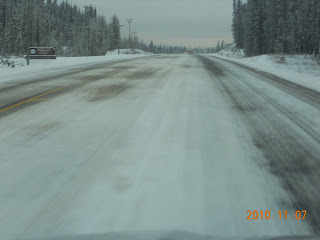 The plows hadn't had a chance to get to it and the traffic was making the snow pack as hard as ice. It was warm enough that it was "kind of" melting, but cold enough that it would freeze hard in spots. What a nightmare!
Posted by JCB at 11:20 AM

OMGosh Julie! This looks treacherous, I'm glad you made it back ok. I am terrified of facing this myself. My boyfriend and I are going to be driving from Victoria up to Yellowknife at the end of Jan and I am kind of freaked out about it.

It isn't so bad if you are driving once the snow is on the ground. They do a pretty good job of keeping the roads clear - it's just driving in the middle of it before the lows get out. It's messy!

I'm not crazy about that white stuff :(