The RCMP - Royal Canadian Mounted Police - for the most part in 2010 are no longer mounted police, but national law enforcement.
The "mounties" as they are sometimes called are often a symbol of Canada.

This last week we went and watched the RCMP musical ride in our community and we loved every minute of it that we were able to see ( the boys attention is still a little short).

Afterwards we met a horse, Sherif, and spoke to one of the mounties.

Here are some fun facts about the RCMP musical ride. Information in italics is from http://www.rcmp-grc.gc.ca/mr-ce/index-eng.htm which is the official musical ride website.

2.The Musical Ride was developed from a desire by early members of the North-West Mounted Police to display their riding ability and entertain both themselves and the local community.

3. Considering that the original Mounted Police members had a British military background, it was inevitable that the series of figures they performed were traditional cavalry drill movements. 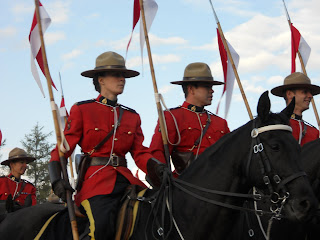 4 . On May 23, 1974, RCMP Commissioner M.J. Nadon announced that the RCMP would begin to accept applications from females as regular members of the force. In 1981 the first female was promoted to corporal and the first females served on the musical ride. This year there at least 1/2 of the riders are female. ( I should check that more closely...)

5. Today, in keeping with tradition, the Musical Ride is performed by a full troop of thirty-two riders and horses, plus the member in charge. 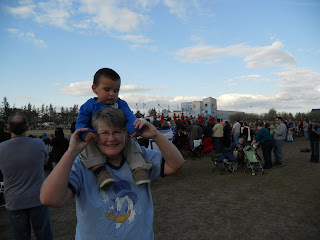 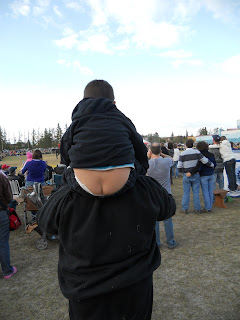 6. RCMP members only remain with the Musical Ride for three years which ensures an annual rotation of approximately one third (33%) of the riders. 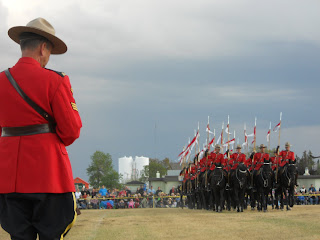 7. In 1873, the horses of the North-West Mounted Police had to be rugged and tough since they were the primary mode of transportation for officers. Today an RCMP horse must be black, elegant, athletic with a good nature and enough heart and stamina to carry it through approximately one hundred performances of the Musical Ride.

8. The RCMP has bred and raised its own horses since 1939 and today the national police force is known to produce some of the finest horses in the country. The RCMP horse breeding program began at Depot Division, Regina, Saskatchewan, and was subsequently moved to Fort Walsh in 1942, the site of a North-West Mounted Police Fort built in 1875 in the beautiful Cypress Hills of south western Saskatchewan. Fort Walsh was home of the breeding program until 1968 when the operation was moved to Pakenham, Ontario about 50 km. west of Ottawa.

9. The RCMP Breeding Farm in Pakenham is built on one hundred and forty hectares of lush Ottawa Valley land where the Remounts spend the first three years of their life, growing, developing and maturing before becoming Musical Ride horses and moving to the home of the Musical Ride, the Rockcliffe Park Equestrian Centre in Ottawa, Ontario.

10. All of the RCMP horses are black because in 1937, Assistant Commissioner S. T. Wood was impressed how the black horses looked with RCMP in red tunics. He ordered the RCMP to only use black horses from that time forward.

11. The RCMP breed their own horses because there is not a supply of black horses like they require available anywhere in the world. The horses are bred for colour, size, and temperament.

The RCMP currently have one stallion that is a registered and licensed Hanoverian. To be a licensed Hanoverian, the horse has to undergo a rigorous testing period (100 days)
There are approximately 27 broodmares at the farm, along with 40 to 50 young horses from babies to three year olds. At the stables in Ottawa, there are approximately 96 horses which include class horses, Musical Ride horses and the young horses in training.

12. Each year the foals are named with the same letter in the alphabet. Some letters are never used because it would be too difficult to come up with many names starting with letters like Q, X, U, Y or Z. The RCMP holds a competition each year where children can help to choose the names for the foals.
The naming of the horses RCMP horses are officially identified by a Regimental Number, and are given a name. Each year children across Canada are invited to suggest names for four to six of the foals in a "Name the Foal" contest. Over the past years, several thousand names have been suggested and submitted for the contest. The remaining foals are named by the Pakenham Farm Manager, who attempts to match names to the distinct characteristics and personalities of each horse. The names of all foals born in the same year begin with the same letter, and every year this letter changes. This method makes it easier for the breeders to keep records on the RCMP horses. To our knowledge this process of naming foals is unique to the RCMP.

13. The RCMP musical ride was an amazing event to attend and I highly recommend it to everyone!

Julie, that's so awesome that you got to see this. I have been dying to see the Musical Ride for years!!

Wow - I have never heard of this! The husband of a friend of mine is a member of the RCMP (or maybe he isn't any longer - I think he just retired) but I know nothing of the Musical Ride. I had no idea what you were talking about at first - I was thinking of a carnival merry-go-round or something ;0)