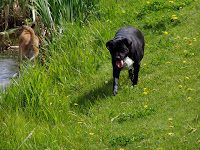 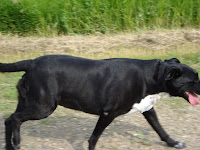 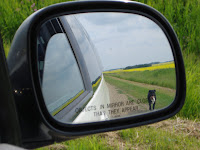 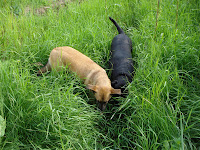 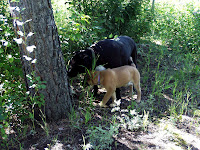 Today I am going to give a shout out to our dog Tora.
A few years ago I left our home in Utah and returned to Canada. It was a traumatic time for us as a family caused by the lack of tolerance in the USA for gay couples. I had gone to school int he USA, met my partner and we had begun building a life together. Unfortunately we could not marry, nor could my spouse sponsor me to immigrate to the US and our lives were thrust into chaos when I was not permitted to extend my work permit.
I left the country in haste, experienced countless problems trying to enter Canada (even though I am a Canadian citizen) and my spouse, I am assuming in her grief, adopted a puppy.
1. 2. We lived in an urban area and there were many people around who bred dogs for fighting. We are fairly sure that Tora (her name means "adopted) was a puppy who was bred for this purpose and discarded when she was too timid.
3. She does not have the disposition to be a fighter and was abandoned as a stry to roam the streets with a pack of dogs. She was VERY social with the other dogs in the neighborhood and when Shel first took her in she would "escape" under the fence in our yard to tour with her friends.
4. At one time she was picked up by the dog catcher and taken to the pound and Shel got a call to go and get her. When Shel went to get her, she was so HAPPY to go home but I don't think that it stopped her roaming ways.
5. She contracted Parvo - maybe from being in the pound - and very nearly died. Shel nursed her back to health and held her for days on end. She made it, but she still thinks she is a lap dog, even though she is now over 90 pounds.
6. She has always had a nervous disposition. When I finally found a job and a place for us to live, I returned to Utah to pick up my family and we travelled to Canada in a U-haul with my spousal unit, Mukiwa and Tora in the cab. We had to go to the vets before leaving and get puppy valium so that Tora could travel with us. Muki LOVED travelling so it wasn't an issue with her, but Tora was a nervous wreck. This nervous disposition still affects her and she does NOT like loud voices. I happen to be "loud" (I think it's genetic) and I have really had to work on moderating my tone because she will hide in a corner quivering if she thinks someone is yelling - even if it is not directed at her.
7. She is generally terrified of adults - especially of males. When my parents came to stay with us, my dad tried to befriend her. My parents love animals and my dad is a very gentle soul. Tora would have nothing to do with him. He tried to coax her with treats and pigs ears. She would literally climb over the couch to get away from him. My brother, on the other hand, gets along with her famously.
8. Tora has never seen me as "leader of the pack". She will listen to my spousal unit but will not do anything at all that I ask her. I like to think I am the leader of my pack, but Tora reminds me constantly that I am not.
9. She is the most gentle, amazing dog with kids. We are foster parents and we have had numerous children in our home. Kids find in her the most comforting companion and they lay on her, ride on her back, pull her tail, and explore her nose and mouth with their fingers. Our son now uses her as a step stool to get up onto things he cannot reach on his own. She has never growled, snapped or flinched and just lets the kids snuggle into her. I have never known a more gentle dog.
10. She is a "mother" to the other pets. Our little man Helios looks for her to snuggle into at every opportunity. When we rescued Helios and Nyx they both nuzzled into her and tried to nurse on her. She does huff at them and gets up to move away but they just follow along to her next resting spot and lay with her again.
11. She LOVES to run. For a dog of her size and musculature one wouldn't think she would be a runner, but she loves to run more than any of our other dogs (except probably Muki).
12. Tora is the best mouser in the house. I think Shilo would have given her a run for the money, but she currently retains the record for mousing. If she and Helios teamed up our acreage would be mouse free but mostly they just fight over who gets to eat their catch.
13. I was not a huge fan of Tora when we first met. I thought she was dumb and she has such a strong bond to my SU and so little to me it was an issue. I still don't think she's the sharpest tool in the shed, but she is sweet, kind, mellow and a great all round pet --- also, she doesn't wander.
Posted by JCB at 11:20 AM