I can't believe it is already time for my stats midterm. I have made study cards and my mom has been quizzing me on them while she was here. I have done quite well in memorizing and preparing for the exam... or so I thought.
I arrived in Burns Lake and busted out the study cards and text books for some review before class.
The teacher gave us a homework assignment last week and said that although we don't need to hand it in it is directly related to the exam and so we need to have the homework done if we want further prep for the exam. I have done the homework.
﻿ 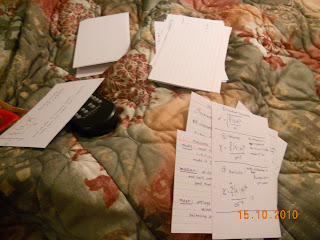 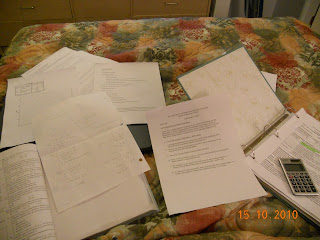 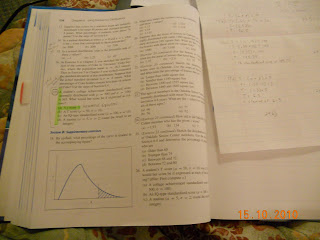 When I checked my school email there was a study guide sent out to the class with some ideas of practise questions from the text that we could do for test prep. I did all the questions on the study guide. I honestly felt as though I had done all I could, I felt I could understand concepts and was ready for the in class review and the exam in the morning. Then I got to class.....﻿
HOLY COW is all I can say. I had my mind completely blown in what I thought was going to be a review session. First we covered completely new material which will NOT be on the exam. Then the prof handed out some articles which had been published so that we could "practise" writing out hypothesis testing formulas.... I was so lost I thought I had gone to the wrong class by mistake. I have been to every class. I have taken notes. I have done the homework and all of a sudden it was as if my brain was not computing a single solitary thing. I was hearing words that people were speaking and I recognized the individual words, but it was as though I was looking at a box of jumbled puzzle pieces. I had NO idea what was being said and what it was supposed to be or where to begin to comprehend.
With the exception of two people in the class, everyone is from one community. They were talking about their study groups and the things they had reviewed and studied together. If I am completely honest I will have to say that study groups never did anything for me and even if I HAD been close enough to participate I likely would not have, but I felt as though they were light years ahead of me in terms of preparation. Some of them had old study guides from other people who have taken this course. Others had copies of exams from other stats courses they were using as study guides. I managed to make it through the class and back to the hotel room. What a lousy night.
Posted by JCB at 12:47 PM

I'd be falling sleep if I had to study stats :)