I just want a fridge, not a remodel of the whole house.

Without any frame of reference you might think. Hmn. That's not THAT far north.
Well here are some of the other locations that share a latitude of 56 degrees north.
Places you may have heard of before and thought, "DANG, those are cold places!"

NORTH of Moscow in Russia,
The Sea of Okhotsk 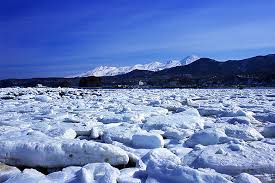 So as far as refrigeration goes, one might think I don't need it. One might think that I could cool my food with ice and snow, which lasts in my neck of the woods something in the neighbourhood of NINE months of the year.

You would think - she can just bury her food in a hole in the ground and keep it cool all year round. You might be right, but the ground is too frozen to dig a hole in. I've tried.

So I rely on a fridge. That is, until our fridge died a few months ago. I thought we would get a fridge quickly to replace the one that died, but life happened (translation - we never got enough money to buy a new fridge) and we have been living without a fridge for a while now. TOO long.
So it is time to replace that which has been lost to us, and that which we have realized is of IMMENSE value to us. We started looking on the internet. Our tastes are simple. White. Maybe we will splurge on a "side by side". Who knew fridges today came with so many bells and whistles. I am not looking for any Cadillac version. As much as I want a fridge, no, NEED a fridge, I am not about to spend 4 grand on one. HOLY COW there are some expensive models out there.
And here's the rub..... Our house is so old that the doors are only 30 inches wide. Do you think there is a fridge out there that I can buy that will fit through my front door? Nope. Not a chance Charlie. I mean, sure, a beer fridge would fit. Somehow that does not seat my nudes. I mean, suit my needs.
I guess it's no luxury ice making, water dispensing, side by side fridge for us. Shoot. I'm just not ready to pull apart the walls in the house to get a fridge through the door. Though the sound of tearing out walls is appealing, it's too cold to start that now. 56 degrees north remember.
Posted by JCB at 5:03 PM

Clever! They don't make normal sized fridges in the US anymore - like everything else they are super sized. When we did our addition that included a new kitchen, I was amazed at how huge those suckers are now. Honestly, just the 2 of us and the kitty don't need the space for a family of 12 in our fridge. But what we ended up with is still pretty damn big. I think the trick for you my dear is to dig that hole while the ground is still thawed!

I woke up to -1C this morning and that didn't make me happy.

I hope you get a fridge soon.