The sink in our bathroom has been clogged for a while and we have had no luck trying to unclog it.
Today I decided I was taking matters into my own hands and taking care of the problem. I was certain the issue was in the p trap because my sons like to play in the water and they are not very discriminatory when it comes to shoving things into holes they shouldn't. 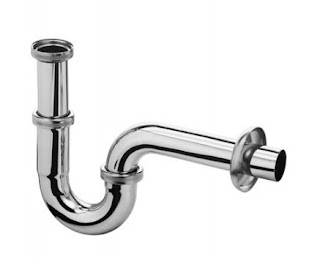 I tried a tool I had at home and it didn't work to take the pipes apart so I asked Spaghetti Eddie if I could borrow a tool from him and he lent me one. I took the pipes apart, unclogged the drain - I was right about the obstruction - and I have the parts now to put it back together. (One of the pipes was cracked and leaking so I purchased a new "P" trap.) I also tried to take photos of the old trap to illustrate how nasty the old plumbing is but for some reason I can't turn off the flash on my camera and every photo I try to take has a glare. Cael was VERY upset that I would not let him sit in my lap. Usually when we do projects at home he is in my lap but I couldn't turn the wrench around him tonight so he had to stand behind me - much to his chagrin. Shel took some photos of the process on her camera which I will have to download.
When I get home tonight I am going to attempt to put it all back together and we will see how it fares. It seemed fairly easy but I am nervous because every time we start a project in our ancient house it requires another ten projects to complete it. One thing leads to another, which leads to another, which leads to another and I am HOPING in this instance this is not the case.
My son thinks I am VERY handy. He calls me "strong mama". OH YEAH!
Posted by JCB at 10:26 PM

Blimey, I am impressed! My bathroom drain is quite slow, would you mind coming to fix it for me?!!

Good job. I love that you know someone called Spaghetti Eddie

Good for you! I like doing stuff like that ... though I can't say I've every done this. Ha!