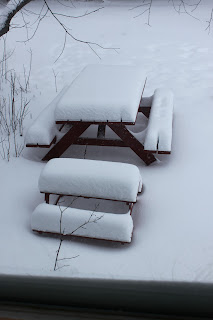 It is rare, but today the Christmas Concert at the elementary school was cancelled due to heavy snowfall. Thankfully they have just postponed the concert until tomorrow so we will still get to see Max singing his hokey pokey reindeer version song. Last year he just sat on the stage and didn't sing a word. Knowing how he is in front of people I can't imagine he will do any better this year, but he is cute all the same!
We were under a heavy snow warning for about 24 hours - ending early this morning  - and I can verify - heavy snow fell.
Last night I charged up the snow blower and put it to work. I went out twice and what a thrill it was. I purchased the snow blower two summers ago and last year we didn't gt enough snow to use it. I was bummed. This year Shel brought it out and put it by the back door so it would be accessible when (we were hoping) the time came to use it. 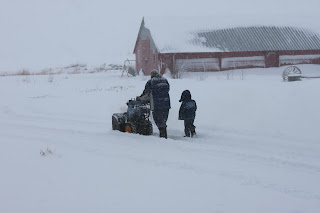 YAHOO!
In the time I had it out - about an hour all together - I did as much moving snow that in the past would have taken me over five hours of backbreaking labour to move.
I am thrilled. In fact, I love it so much I can't wait to get home and use it again!
Max of course came out to "help". He is a trooper. 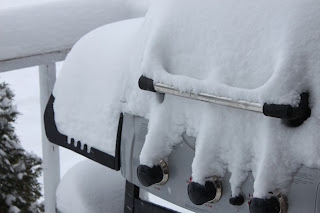 No hamburgers on the grill tonight!
Posted by JCB at 3:46 PM

Wow! You have waaaaaay more snow that us.