I think I have actually posted something like this before, but I am happy to do it again. This week the topic on "ten on tuesday" is ten favorite meals.

1. When I was on my mission we would rely on church members for meals. For the most part in my mission this was very successful and we were fed well (we did eat some scary things still). One of the most memorable meals for me was prepared by an Iranian family who fed us Chelou Rice and Tadig. It was SOOOOOOOO yummy. I have never had it since, but one day I will find a way to try and recreate it. It is rice which is cooked with saffron and yogurt and the bottom of the rice makes a crust. It looks something like this:

2. From the Union Grill in Ogden, Spaghetti with browned butter and Mizithra. YUM. 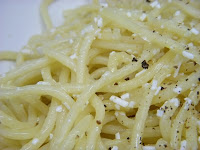 4. Also on my mission, we had an appetizer of Artichoke hearts at one meal. (it is not typical to have appetizers for meals, but in one place we did!) I had never had artichoke hearts before and I was a little nervous to eat something that resembled a cactus to me, but I tried it out. Simply eating the artichoke dipped in butter was a great culinary experience.

5. I seem to be on a mission memory lane here, so either I ate good food on my mission and haven't eaten as well since, or as I prefer to think of it, there is a lot of good food in Seattle! We went to a restaurant, whose name I cannot remember but I am sure I could find it if I looked hard enough, and for dessert we had grilled peaches with whipping cream. It isn't something I would have picked off the menu and said "hey - this looks yummy" but the people who took us recommended it and I am glad they did. I would go back just for dessert.

6. My mom has three recipes which I LOVE. The first is Margie's Chicken and Nuts. I happen to really like my mom's cooking and I particularly like it now that i have moved away from home. When mom comes to visit I request these meals.
7. The second is Kedgeree. My mom says there really isn't a recipe for this and I suppose she is right. My spouse makes it and I enjoy it as much when she makes it as when my mom does. Basically it is just broiled haddock over rice. For someone who does not like seafood, I LOVE this dish. (It has been accused of being "bland" which I suppose it is.)
8. The last is one she started making after I left home but which I had in Singapore when I visited them there. It is called "chicken balls" and it is chicken wrapped in pastry with cream cheese, onions etc.
9. While I LOVE eating the tacos my spouse makes (mentioned below), we had a great meal at Diana's in Southern California. I have a bit of a Mexican food obsession.
10. Since moving to Canada my spousal unit and I have missed Mexican food TERRIBLY. We have had friends send us chorizo and corn tortillas in the mail so that we could cook for ourselves. A few years ago we went to San Francisco for my in-laws anniversary and we ate home made Mexican food EVERY day (Interspersed with El Pollo Loco). I was not sick of it at all, even though we had the opportunity to eat elsewhere, we declined in favor of home made tacos.
BONUS: Since I gave a few "home" recipes as favorite meals I am going to add two more. When I was in Singapore my family went to eat at a Thai restaurant and the meal was DIVINE. For dessert we had mango sticky rice and it was something to be remembered for sure. I am also a huge fan of thai fresh spring rolls. FRESH being the operative word. There was a restaurant in Ogden where we could get these and I did - as often as I could - and especially when I could take them to work and eat them in front of my co-workers as obscenely as I could.
Posted by JCB at 4:32 PM

Everything on your list sounds good, expecially the "chicken balls". Chicken is one of my favorite foods.