The smell of poop 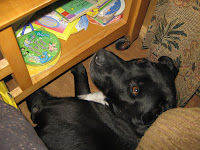 In our home (which is really the bank's home, because we still have 29 years of payments to make), there was an odour. It's not uncommon for my TRAINED dog to leave us a fecal deposit when she decides she doesn't want to squat outside. We have been working very hard to make sure she gets out frequently, she just doesn't WANT to go outside. We live in the country and there are miles an miles of open fields in which she can run and poop, but the basement floor is simply more convenient. I take some solace in the fact that some famous people I have seen on television (the Osbourne's and Tori Spelling) also have dogs which do this to a much greater extent than our dog.
The other day it smelled BAD in our house which is the first indicator to me that Tora has pooped. So I took her to the door to force her outside - a little late I know - and when I opened the door the smell outside EXCEEDED the offending smell inside. Lucky for us, we live near a pig operation and the prevailing winds were from the northwest. We are directly in the path of pig poop odour. THEN, the farmers surrounding us decided that they would apply fresh manure to their fields. WOW. The smell is insane. The cold doesn't kill it and the 70 kmh winds we have had the past week have not dissipated it any quicker. ARG. The thing about this odour which is particularly offensive to me is the fact that I watched a special on PBS where they talked about smells and how a smell is really small particles of substance floating through the air and entering your nostrils. That's pig poop floating on the breeze. Particles of poop entering my nose. There was a time, when smells were so strong I thought it was a good idea to breathe through my mouth instead of my nose, so I didn't smell the grossness in the air. I no longer do that - since the thought of pig poop in my MOUTH is more offensive than pig poop in my nose.
I sure hope we don't have a winter of stink. Poor Tora took the blame (ONCE) for something she didn't do. I just don't know how to keep the outside smell out!