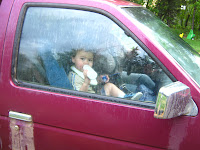 This morning I took Max to the babysitters. We have decided that he needs to get some interaction with other kids and so for two mornings a week he will go to a babysitter.
We went last night and met her and some of the kids and Max checked out the place. He is a shy kid and it took a while for him to warm up and leave the protective area of his mother's knees, but he did venture out before we left.
He was very excited to go for a ride in tinkey winkey this morning. He is so long his feet reach the dashboard and he can use his one foot to open the window. He can also reach the door knob - which I discovered as we were driving down the dirt road and the door flew open. Note to self - lock the door! The window can stay open because I am not pulling over continuously to shut it.
He wasn't too excited to be left this morning and I have been thinking about him ever since. I know it was his first time and I HOPE he gets more excited to be there. I do NOT like leaving him when he doesn't want to be left. It was hard to walk away, I kept thinking, "This IS for his benefit". This parenting thing can be a real kick in the teeth some days.
Posted by JCB at 11:21 AM