Day in the hospital

We have been waiting a LONG time to get these MRI's on the kids. It feels like forever.
I would normally not even consider travelling to the city in the winter but we were able to get all three appointments scheduled for the same day and changing the appointment would mean waiting another six months or more so we just needed to suck it up and go.
All of the appointments were scheduled for different times beginning at 7:45 so the kids were supposed to stop drinking fluids at different times starting at 5am. We decided it would be easier if no-one had anything to drink so we just packed up and went to the hospital first thing in the morning without food or drink for anyone.
The U of A hospital is something else to navigate. The parking levels are 1-5, the hospital levels start at zero. The pedestrian ramp from the parking lot into the hospital leaves the parking lot at level four but enters the hospital on level 2. There is an MR research center and an MRI center and the two are not the same thing and both are on different levels. I parked on level 2 in the parking lot and had to take an elevator to level four to walk across - note to myself for next time - park on level four!
I had dropped Shel and the two little kids at the door and had the two big boys with me. We got into the hospital and took the elevator to level 0. We walked around on level 0 for quite a while. We were in the DREGS of the hospital. We passed shipping and receiving with huge pallets, we were in VERY dim hallways with barely any light, we saw people prepping meals. The boys were interested in everything we passed so I pretended we were right where we were supposed to be! Eventually we found an elevator and went to a different level and came to the place we were supposed to be. The nurses were ready for us and started getting everything ready right away. They asked if I wanted to go into the MRI room with the kids and I said yes and had to fill out a form. Apparently because of my tattoos I am not permitted into the MRI room. Shel is not permitted because of her previous surgeries. This meant we could be with the kids in the recovery but not in the actual MRI.
The baby was given a mask for anesthesia, as was CJ. We told Max he would get a mask also but apparently because of his size they said he needed a needle. Poor kid was VERY distressed over this. I still don't quite understand because I could swear that as an adult I have had gas for anesthesia before so his size shouldn't matter?
﻿ 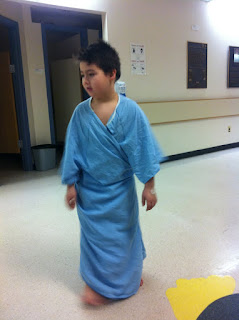 There were no pajamas in Maxies size so he got to wear a gown.
﻿ 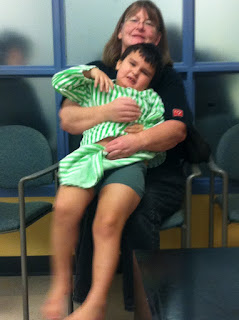 There were pajamas in CJ's size but he wanted absolutely NO part of them. He was upset from the minute the nurse put freezing gel on his hands and he did not want to be in the hospital at all. He has never read "The Boy in The Striped Pajamas", so I don't know why he didn't want them on!
﻿ 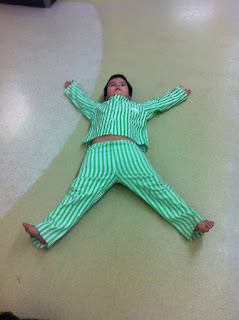 Once he was dressed he calmed down enough to make me a snow angel on the hospital floor.
The next part of the day was the most stressful. When they are stressed the boys want their moms. Which one they want depends on which on e they have - they usually want the other! We were trying to trade places to be with whomever wanted us at the moment but with three kids all getting anesthetized and then coming out of anesthesia it was quite difficult. Of course Max was upset at getting a needle and when he woke up he just cried and cried and cried. He also didn't feel well physically and was as white as a sheet the rest of the day. CJ woke up a lot easier than Max but he never did get over his frustration and was grumpy and stamping his feet. I don't know why but Shel deals better with the crying and I deal better with the foot stamping! 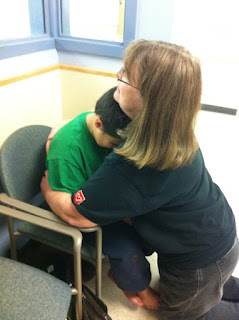 Once all the kids were out and dressed we were able to leave. Even getting out of the hospital was a palava. CJ wanted to ride in the glass elevators and then play with the toys he could see through the windows. I was so hungry I could not take another step without getting something into me, we had not had anything to eat or drink all morning either. Jumping bean and baby didn't have boots on so they couldn't walk out into the parking lot to get the car. All in all it was a very stressful and emotional day that I am glad we will not be repeating :)
Posted by JCB at 7:00 AM

I am exhausted for you! What a trying day. I hope everybody's results come out ok!