Earlier this year we had to put our Great Dane to sleep. He had bone cancer and was in considerable pain.
He had a special bond with Max and Max has missed him dearly. Soon after his passing Max started asking if he could get a puppy. Shel and I were not ready and told Max we needed to wait. Partly we were not eager to get a dog so soon after losing our baby. Partly we were waiting for the weather to improve so we were not truing to toilet train a dog in the winter or the wet, muddy spring.  Max decided that we were waiting for "summer's eve" before we got a new puppy and he started asking if it was summers eve yet.

We have been looking online and on rescue sights for an addition to our family. We are firm believers in rescuing animals. There are SO many dogs and cats that need homes that are waiting in foster homes or shelters. We are highly suspicious of some breeders having seen the kind of "puppy mills" that exist in our province and knowing people who have purchased dogs from these breeders and had to deal with all kinds of health problems when they get home. We also have had bad experiences with thoroughbreds and the health problems these dogs experience so we knew we wanted a mixed breed. I would have loved another Great Dane but they are very expensive and hard to come by. Shel has always wanted a yellow lab and so we were looking for any labs that might be available. We looked and looked but had not come across anything that we were particularly interested in. We follow a pitbull rescue sight in Salt Lake and have often discussed getting a dog from them and talking a road trip to our old stomping grounds to pick it up. We had a pitbull before (Tora) who Shel rescued when we lived in Ogden and she was the most amazing dog. (OK. I have to say here that we believe ALL of our dogs have been amazing dogs, but all for different reasons. Tora was the most gentle, most loving and the BEST dog we ever had with kids.) All in all we did a lot of talking and were not any closer to making a decision on an addition to our family.

I really wanted a puppy because I worry that without knowing the background of an older dog you n ever know what kinds of issues they have when they come into your home. Shel would like an older dog because they are less likely to be adopted, they are past the puppy stage and usually have some kind of training from the rescue or shelter where they come from before being placed. We looked at all ages and most breeds of dogs.

A few weeks ago a little puppy was posted for sale on the local buy and sell sight on facebook. I called to inquire and was told someone had already shown interest and the puppy was no longer available.

Last week another puppy was posted for sale on the same site and I made another inquiry. I thought it was the same dog as I had seen but the lady told me it was not. I asked if we could visit her with the boys and with Zuva (our other dog) and all of a sudden she showed up at my office with the puppy and said she would prefer not to show it to little children on the first visit. (When you live in a small town people apparently know where you work!) I asked her questions about the puppies history and she proceeded to tell me a story about how her sister breeds dogs and the mother passed away from cancer and this little puppy had to be bottle fed and was 8 weeks old. When she came to the office she asked a price for the dog that was more than a hundred dollars more than she had asked for on the website. I asked if it had any immunizations and she said it has been de-wormed and received its first shots but that the papers from the vet showed the wrong date on them and said that the puppy was 12 weeks when it was only 8 weeks and she needed to get back to the vet to change the paperwork. The puppy was cute, but the more she spoke the stranger her story about the dog got. I thanked her and said that I wasn't interested at this time and let it go.
When I got home and told Shel about it there was just this nagging in the back of my mind. Was the puppy in a good home, should I have paid the money just to get her and take her out of a strange situation?

On Saturday morning I received a text from the first lady I had inquired to regarding a puppy. She asked simply if I was still interested. I had suspected, but was not certain, that the puppy I first inquired abut was in fact the puppy I met a week later offered by a different person.

I was extremely sceptical. I started to ask some questions and it turns out there were some shady dealing happening with the puppy - the second lady had taken the dog, passed off a bad check and was trying to sell her for more money. After a few hours of back and forth the original owners of the puppy had recovered her and were offering her for sale again. I asked if I could bring the boys and Zuva to meet her and she agreed. We drove to her home and I visited with her while my boys and Zuva played with the little one. We decided to take her. I guess it is Summers eve! 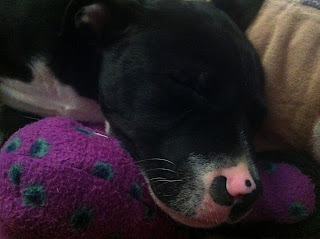 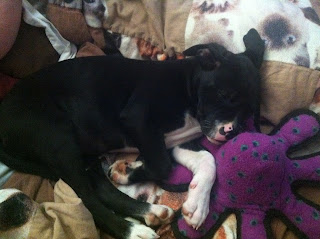 The boys ADORE her. We are crate training her, as we have done with all of our dogs. I was worred the first night that she would whine and cry, as puppies do, but after less than a minute of whimpers as she settled she didn't make another peep for the whole night. When CJ woke up he came into our bedroom and announced it was puppy time! Originally we told they boys they were not allowed to take her outof the crate in the morning , but Max has difficulty remembering that so we are teaching him he needs to take her outside immediately. He is so responsible he takes her out and  makes sure she has food and water. She plays very well with Zuva and so far has fit in beautifully with our family. We have tried to come up with a bunch of different names for her, but the boys insist her name is "Rescue puppy" and so "Rescue" it is!She is smart as a whip and needs some training. I can't wait to spend more time with her.

Now all I need to do is try and train my spouse that CRATE TRAINING means putting her in the crate to sleep. I came home from work late Wednesday night and Shel and the puppy were all snuggled and sleeping together in our bed! I don't hold out much hope for training Shel. That old dog won't learn new tricks!

And what a story! You were destined to have her.

I can't blame Shel ... I couldn't resist snuggling with a puppy either :)