It's official. I am a soccer mom.

We signed our boys up to play soccer this year. Our oldest is in the under 6 group and youngest is in under 4. When you have kids in our town play soccer a parent must be at the field with the child - it's the rules. Since I have to be at the field and since Max refused to go onto the pitch the last time we signed him up, when I was asked if I would coach a group of under 6 kids I said "yes".
And then something happened to me. I got all excited. I made a binder of drills for the kids. I made name tags and I made a spreadsheet to check the kids in and jot notes on each one so I can make little certificates for each of them at the end of the 8 week "season". I made notes for the parents with a list of things to bring to each practise. I bought hula hoops and pylons to use in drills. I lay in bed at night and think of things to do with the kids so they will have fun. 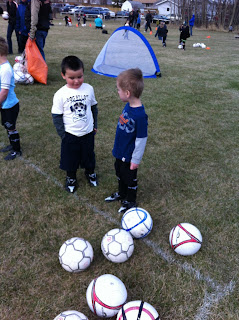 ﻿
I need an assistant and trying to get someone to help is near impossible. I have asked four people now and all four have declined. Shel would help but she has to be at the field where CJ is playing. (This also means she gets photos of CJ but not of Max - which I think she will sneak away to get this week) 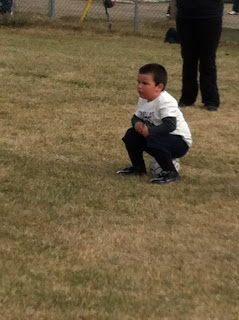 Practise number one was cancelled because the fields were too wet. I was completely bummed. Practise number two  was a complete fiasco. ﻿It was the first night everyone arrived at the fields. 90 kids and 90 parents showed up. The co-ordinators and the coached were not identifiable in any way. The coaches were not given lists of kids, but duo tangs with a copy of each child's registration - so if a parent came up to ask if their kid was on my field I had to go through all the pages to check each name. There were not balls and no whistle. Parents couldn't find where kids were supposed to be so they were just asking me if I would take their kid and I ended up with almost double what I was supposed to have. (Which I don't mind - cause it important for the kids to play - BUT very difficult to organize!)

It is SOOOOOO important with little kids to catch and keep their interest. If they come on night number one - for many of them their first experience ever playing soccer - and they don't have fun, they won't want to come back. I was extremely frustrated with the lack of organization and I have a LOT of ideas to improve things but for tonight all I want to do is focus on my little group and make sure they have a BALL. I am better prepared for tonight and I have high hopes for the rest of the season.

I'll put of solving the organizational situation of day one on the field until next year!﻿
Posted by JCB at 2:24 PM