The boys are 27 months apart. They sometimes, but not always, play well together.

Cael is going to be three this summer and he is asserting more and more independence (much to my chagrin).
He is more adventurous than his older brother, but less destructive.

It USED to be that Max would never go anywhere and so we always knew exactly what he was up to because he was within a few feet of us always. He took things apart, for sure, but we were always fairly aware of exactly what was being stripped to pieces.

Then along came Cael. The kid is a wanderer. He is more social and more confident than Max, but less destructive. Unfortunately he will go anywhere and now that Max has a partner in crime, Cael leads, Max follows and destroys!

More recently Cael has wanted to be the boss of himself and this has not gone over well with Max - who likes to be in charge of EVERYTHING. Max wants Cael to go with him, but then wants to boss him around and life has become a little more complex between them.

The other morning they were on the back porch. I thought they were there getting boots on to go outside in and thought nothing of it. They were getting along, and I have come to cherish these moments when one (or both) of them are not screaming for mothers intervention.

The next thing Cael walks into the kitchen and with arms raised says "TA DA!" - which is what he says when he has something to show off.

It took me a moment to see what it was that he was showing off... 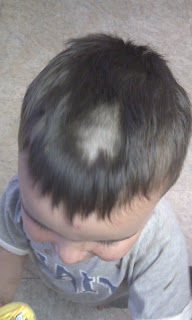 Max has climbed into the top of the bathroom cupboard and got the electric clippers and opened Salon Maxie.
Cael was not the only one sporting a new "doo"...
The third member of the little trouble trio - Hugo - also got a haircut. 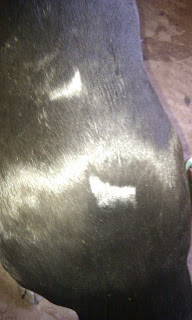 I know I shouldn't laugh, but I can't help it :) Hugo looks like he fared better than Cael.