1. The place I live is called "The Mighty Peace Region".
I think it is perfect. I need Mighty Peace!

I am going to share with you some facts about this place, but I will let you know right now that I got most of my information from this website if you are interested in checking it out for yourself: http://www.albertasource.ca/mighty/index.html
Also, the Mighty Peace Tourist Association has lots of cool info.

2. The Peace River flows from the mountains of British Columbia through this valley all the way to the Arctic Ocean. The Peace River got its name because it was along these banks the peace was finally settled between the Cree and Beaver Indians.

3. Dinosaur footprints were discovered on the south bank of the valley. A cast was made of the 4 toed prehistoric creature and can be seen at the Interpretive Centre and Tourist Centre.

4. Dunvegan Provincial Park is located just a few kilometers from where we live. It is the site of one of Alberta's earliest fur trade posts and missionary centres dating back to 1805.

5. In 1805, Archibald Norman Macleod established a trading post naming it Fort Dunvegan, after his family's ancestral castle in Scotland. Dunvegan became a Hudson Bay Company post and operated until 1918. The Factor's House and the St. Charles Rectory and Church (1867) are the only two buildings remaining from that time.

6. A ferry was used to cross the Peace River at Dunvegan as early as 1909 and ended ended in 1960 when the longest spanning bridge in Alberta was built. 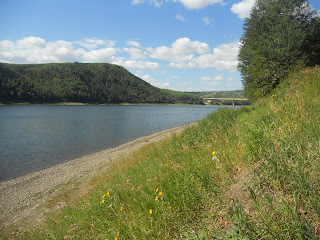 ( I have better pictures of the bridge, but I wanted to use one's we took and right now I cant seem to find any!)

If you want to know more about the Dunvegan Bridge and it's construction you can check this out on youtube:  http://www.youtube.com/watch?v=LVS-aMkPjmg&feature=player_embedded

7. Fairview College Campus of Grande Prairie Regional College is located in Fairview Alberta, Heart of the Peace Region. The College campus is home to Neos, a library cat - featured on the Purr and Fur Website. I would like to have a residence cat, but we have a no pet policy in the residence so it would be difficult to justify having a cat in the office. I have in the past brought my dogs to the office with me, but now we have new carpet in the office so I likely won't bring them in again soon!

8. Moving here was very difficult for me. I was convinced I was a city girl. I jokingly said I was having "reverse claustrophobia" because there was just so much open space and I felt lost in it all.
I have now been here 8 years and I think I might be settling down - maybe. 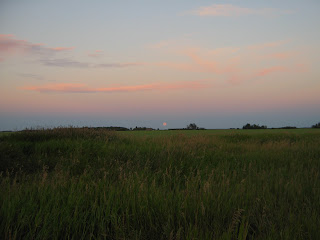 9. There was once a beekeeper technologist program in Fairview which was internationally renowned and drew students from all over the world. I think this is interesting because I would LOVE to keep bees, but of course the program is no longer offered. Dang it.

10. Both of our boys have come to us here in the Peace. They have been raised here. They have enjoyed a life here that would have been difficult to provide them with in another location. It's the perfect place for my outdoor loving boys. 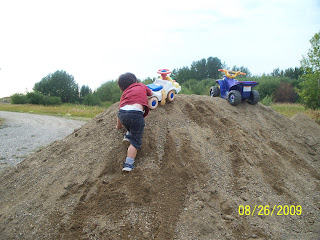 11.  A Beaver Indian legend says, “Drink the waters of the Peace River and you will return”. I haven't had a drink yet, but so far I haven't left either! 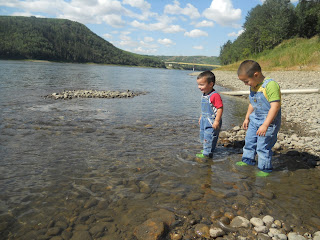 12. The Peace River Museum has a blog which you can check out here for more information on events, exhibits and cool tidbits about Peace River history.

Check out other participants of Thursday Thirteen HERE.
Posted by JCB at 5:03 PM

The furthest north I've been is Grande Prairie.

Looks like heaven there where you live!
I agree with you--I love going into a business where there is a resident creature, whether it is a parrot(there is a giant macaw strolling about in the local petshop), dog or cat. In fact, I think most bookshops I have been in, usually have a cat on the premises.
I am going to check out the link for Neos now.....