Patience is a Virtue.

There are a LOT of virtues out there people. Just google it and you will find out.

I am talking of patience as a heavenly virtue - along with chastity, temperance, charity, diligence, kindness and humility and as opposed to the seven deadly sins - lust, gluttony, greed, sloth, wrath, envy and pride.

Back to patience.
I wish I had more of it. My spouse USED to be the most patient person I had ever met until she had brain surgery (and we have discussed the many ways in which her life has altered as a result of that, one of the most significant ways she changed however was that she is no longer as patient as she once was.)
This has come to mean that in our relationship and in our family I tend to be more patient than she is. I still wish I were more patient.

Patience is on my mind tonight for two reasons:

The first reason is that when my spouse was gone I had a bit of a loss of patience and had what could loosely be referred to as a "temper tantrum" and when my sons were playing in their bedroom at 3 am after repeated warnings, fresh bottles, back rubs, diaper changes and so on I went into the room to discover they were playing in the crib with the top of a wooden changing table balanced on the edges.
This annoyed me for a few reasons. Let's say the PRIMARY reason is that it was completely unsafe for them to be UNDER the wooden changing table surface. It could have fallen and hurt them. In my frustration I GRABBED the changing table and FLUNG it to the ground.
Well......
My oldest son, in all his wisdom, KNEW it was unsafe and so as a precaution he had TIED the change table to the crib.
When you throw something to the ground that has been tied to something else there are laws of physics that say that item will return to it's original location - unless something is in the way. Well: 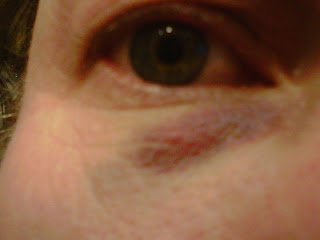 Here is the interaction I just had with the security guard in which I determined there IS such a thing as a stupid question.

I am in my office and the security guard it sitting at the window of the office - less than 2 feet from the change machine in plain sight. The security guard calls out to me in my office and says " is the change machine broken". I replied - "If the light is on it is because the machine is out of loonies." The guard got up, walked to the machine, put money into the machine and received change for his bill. He comes BACK into the office and says to me - "Well I just got 20 loonies from it."

I couldn't help but say to him, "Well then the machine isn't broken!"

Something has to stop my downward spiral of frustration. There are some serious cracks in the veneer of my virtue. It doesn't help that I gave up hope for Lent.
Posted by JCB at 11:08 PM