Dumbest McDonalds Ad EVER. Thanks for nothing!

There is no McDonald's restaurant in the community in which we live. The closest is in a neighbouring community which we visit MAYBE once a month, sometimes less frequently. When we do go to shop, we stop in and eat in the store at the McDonald's on site.
We visited there this past weekend.

Hanging from the ceiling in the store is an advertisement on three banners. The first banner says 'Fresh Choices" with images of coffee and eggs. The second banner says "Quality Ingredients" with images of two of their sandwiches. The third banner says " Made simple and fun" and the image is of a child holding up two chicken nuggets to his (her?) eyes.
Really?
REALLY? 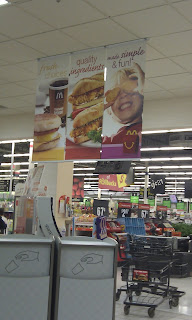 We have tried to teach our children that food is not for playing with - it is for eating. Food is not a toy or a game. Now we are sitting in the restaurant with an advertisement bigger than they are with a kid playing with his food, and the boys think this is an invitation for them to play with their food. What fun! What shrieks of laughter! What a ninny their mother is for telling them it isn't funny when LOOK! Up in the Sky! Chicken nugget games on a banner!

Seriously McDonalds. What a LAME, STUPID ad. I'd like to thank you for the additional hours I now have to spend to convince my children AGAIN that the people at McDonalds have no idea what they were doing when they let that kid play with his food, took a picture of it, made banners, and hung them all over the world.

ya, McDonald's is stupid! Seriously!

What do you expect from Raunchy Ron's?