Since we live in Canada and we DO raise boys, we thought it was finally time that they learned to skate. I had intentions last year of teaching them to skate on the dugout, we even shovelled it off, but the skating lessons never actually transpired. I am loathe to become a hockey mom and undertake all that is involved in being such a mother (my hats off to those that do make this commitment) but for this reason (and the fact that winter and ice rinks are not two of my favorite things) we have never had the boys learn to skate. Until this year.
We signed the up, bought the equipment and set out on our skating adventures.
True to form, Max is not interested at ALL. I did actually to get his skates and helmet onto him, but he removed them in short order and spent the rest of the time at the rink watching the proceedings and watching blues clues on my phone.
CJ on the other hand could not get onto the ice fast enough. He is in LOVE with skating and cannot get enough. I think we may have a hockey player on our hands in the future (huge sigh).
When we finally DID manage to get him off the ice he didn't want to take his equipment off and has since asked numerous times to go back to the rink and skate again. This from a kid who for the previous years of his life has seldom uttered words that didn't involve motorcycles and quads!
We have him signed up for one night a week but we may have to increase that and let him do it more. I DID have thoughts of perhaps taking him to family skate, but SHUDDER that would involve me putting on skates. As quickly as that thought entered my head it did leave!!! 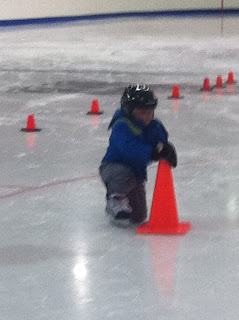 I tried to get a good shot but none of them turned out. Alas, the capabilities of my i-phone are found to be lacking :( 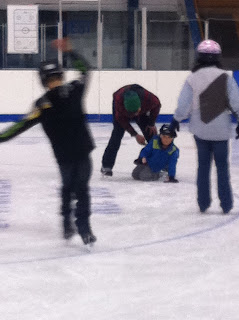 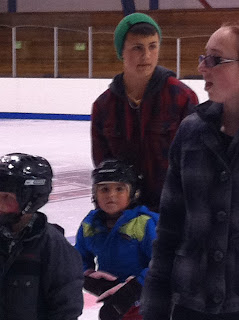