I like shoes. I don't own a lot of them. I used to have more, but that was before kids and dogs.
I have friends with kids, dogs AND shoes, so I am aware on a conscious level that is is possible to have all three in ones life but somehow I have not managed it.

So even though I like shoes I have just a few pairs.

I have a pair of red and black DC's, a pair of brown semi-dress shoes, a pair of Birkenstocks, a pair of runners and ...... that's it. I had a pair of winter boots but they were wrecked last year so I need to get a new pair.

It has been a few year since I bought new shoes and it is time to get some again.

Now that it has snowed here the boots have become a bit more of a priority and I knew it was time to update what other shoes I have but that plan was put into fast forward this morning when I went to put on my runners for work and found this: 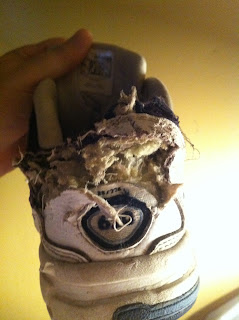