While mom was here we had plans for quite a few things and the weather was not supportive of our endeavours. It rained and rained and RAINED. We had two "big" things we wanted to get done - one was to paint the barn and the other was to do the back entrance. Earlier this year we needed to replace the doors (front and back) on the house. Where the back door was we could not fit a regular sized door and so we were stuck with one of two options. One was to special order a smaller door and the other was to move the entrance from the east side of the back porch to the south side of the back porch. Since we have had such difficulty moving anything in and out of the house because of odd sized doors we opted for number two - to put in a regular door but move it to the south side. So we moved the door, but then we were coming in and out of the house into what used to be a flower bed and we were tracking mud in and out. So mom and I decided to fix it. 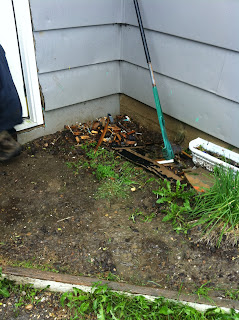 I found an idea on pinterest that I LOVED and showed the photo to mom. She loved it also and so we did it!

We had to begin by removing all of the old soil. We dug all the way to the bottom and took it in the wagon (because of course the wheelbarrow had a flat tire). 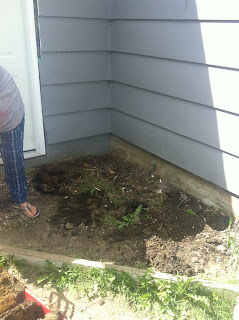 We have determined that every time we begin a project we run into all kinds of problems and so what begins as a one stage project ends up being a ten stage project!

We cut the wood from our own wood pile. We had to wait until the wood was dry so we carried logs into the quonset to dry out. Then we got the chainsaw up and running and cut the logs. It is heavy work to cut the logs and so mom and I were taking turns with the chainsaw. After we cut what we had in the quonset we went to the log pile to see if we had anything there we could use. We had a couple of super logs to use and so we started to cut right at the pile. Mom was holding a log for me and then I was holding the log for her. In one of our trade offs mom went to hold the log for me and fell into the wood pile! Oh we laughed and laughed.


We got the logs cut and laid them out. As we were digging out the old soil we realized that the edge piece of wood was rotted right through so we needed to find a new edge piece and stake it into the ground. 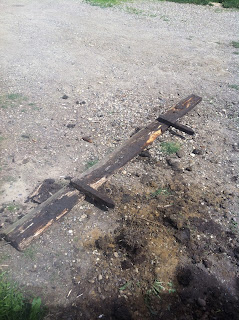 We found a new edge piece and staked it in. 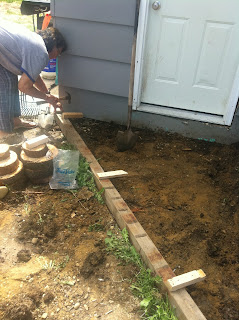 Then we brought sand (from the boys said pile and using the red wagon) and we filled the spot with sand. Then we had to put in each log and level them all. My log cutting is not perfectly even so some of this took some creativity! 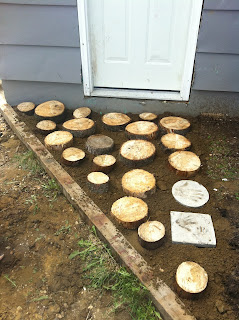 We had cement hand prints from us and the boys that we used as two of the logs. We left a spot against one wall of the house where Shel would like to build a bench so that still needs to be done. After we got all the logs in and leveled we used rock from the driveway to put between the logs. 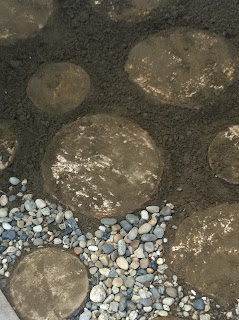 We also filled two baskets with flowers and hung them on the wall on either side of the door - I thought I had a photo of that but I apparently need to find where I put it! 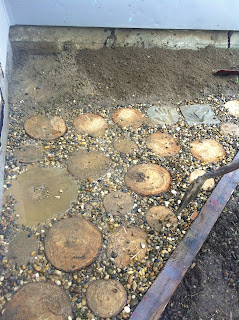