second time on the ice 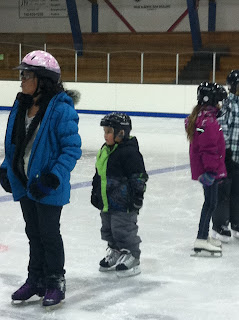 I mentioned in an earlier post that we signed up CJ for skating lessons. Today was the second time we have been. I have to say, maybe it is because we aren't going as much (some kids go twice a week) or maybe it is because I have absolutely NO clue how to "teach" anyone to skate - but the "techniques" leave an awful lot to be desired.
I am not saying anything because I don't want to reveal my ignorance, but one kid showed CJ how to push himself up into a standing position without using anything to help him - and that was it. No-one even approached him for the rest of the hour. He just fell down, lay there on his back, rolled over to his tummy, must have gotten bored, and stood up. I was VERY impressed with his ability to stand up after only one previous hour on the ice in his whole life and he was thrilled with himself. In an hour he fell three times and got up three times and then wiggled his feet back and forth and moved a few inches. He lay on his back for about 45 minutes of the hour. To me that isnt really "instruction", but what do I know?
He is INCREDIBLY happy to be there and he doesn't want to leave when the hour is over so I guess we will leave it for now.
I thought about taking a book and reading but I have to watch him the whole time because he keeps looking over at me to see what I am doing and waving. I know it wont be long before he does not want me to wave at him - he is growing so fast - and it makes me happy to see his smile and his wave but HOLY that's a boring hour for me!

Enjoy it for now because as you said, he won't be concerned about you being there soon.