And then we were six

We got a call a few weeks ago saying some children were likely coming into care and would be placed with us. Then we got another call saying it was happening within a few days. The way things usually work with foster care is that they call to see if you are open for a placement and sometimes the placement never happens. We have learned not to get too excited or too prepared because until they show up at your door the placement is not guaranteed. In one instance they even showed up at the door and within 24 hours were back to remove the child again.
In this instance they called Friday to say it would likely happen within the week, and on Monday they called to say they were on their way.
As quickly as that we have increased our numbers from two kids to four, all under the age of five! Needless to say bedtime was interesting.
We were not quite ready. It has been so long since we have had babies that we thought we were done with cribs and with strollers and high chairs. I'm a lot less stressed than I would have been when we started fostering that all these things are not in place right this second. It's been a long time since I have put a crib together. 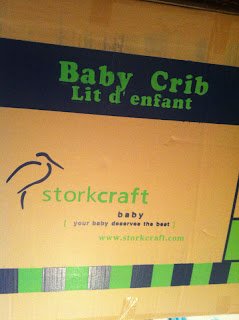 CJ decided that he did not want to be a big boy anymore. I was holding one little kid, Shel another, Max wanted his back scratched ( a bedtime ritual) and CJ wanted to be in my lap! Everytime we tried to lay one child down they would start to cry and when one cried the other joined in. ONe little one has attatched itself to Shel and she can't leave the room to go to the bathroom and a fit of crying ensues.
I am sure things will settle down but I had to laugh at the comedy of errors that has been bedtime in our house this week.
Posted by JCB at 11:36 AM

You and Shel have such big hearts!