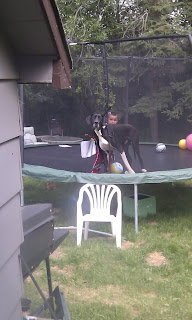 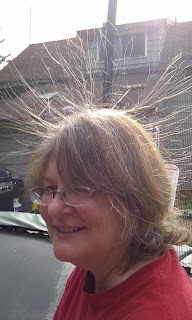 While mom was here Max did a couple of funny things.
One thing he did was to start calling me by my first name!

I think it is because mom was here and he heard her calling me by name a lot. He can't really say "Julie" so it sounded like "Goo-ey" but it was frustrating (and mildly funny) to me! He is back to calling me mom now although sometimes he still slips in a "gooey!"

The other thing he started as we were putting up the tramp was to remind us of the "rules at Cece's house".

Cece is our neighbour and she has taken the boys for respite since they were in foster care. We love her! She has a trampoline at her house and until we put up our own it was the only place Max had been on one. Cece has trampoline rules - and one of them is "Only two people on the tramp at once". In the top photo you can see Max waiting for his turn while Gramma bounces with CJ. (We were actually not finished putting everything up but they were very eager to jump so we had to stop our construction project while we had a jumping interlude.)

Cece apparently has a LOT of rules. I tried to say "well we are at our house Max and our rule is ...." but he could not be deterred.

One afternoon mom and I went into town to run some quick errands. As we arrived home and got out of the vehicle Hugo came running over to the van barking. Hugo is a nerd and barks at everything that moves (I don't think he can see at all) and mom said to him. "Hugo, Don't bark at Gramma, That's a rule at Cece's house!" I died laughing.


One last thing I will share before signing off this epistle. We have had no proper fridge in the house for many months. We have just been using a bar fridge. We bought a proper fridge recently but when it arrived it was too large to get into the passage from the living room to the kitchen so the fridge was stuck in the living room for a few weeks. We decided when mom was here to move it into the kitchen because we needed many hands. When we moved it into the kitchen, -which involved taking off the fridge doors and removing a kitchen lower and upper cabinet and then levelling the floor ( a small indication on how something on the list like "move the fridge" turns into a major project!) we took the mini fridge out.

I had planned on taking the mini fridge to work and putting it into my office. Mom and I carried it together and put it in the back of tinkey winkey, my little truck. I don't want to exaggerate but I think the truck was parked about 25 meters from the house. We put it in the back and then went to town to run our errands. We were going to take tinkey into town but when we got in the battery was dead so we had a change of plans and took the other vehicle. When we returned from town Max had taken the mini fridge out of the back of the truck BY HIMSELF, carried it over to the house, plugged it into the outside plug which we use for winter plug in - AND he had put his hammer in the freezer!

I've never been on a trampoline before ... they made it look so fun on "Big".