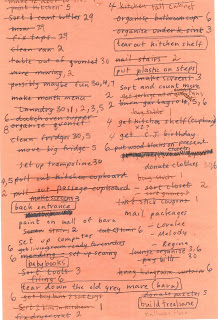 Here is the list we made of things to do.. When we completed the item we crossed it off. If we did it more than once we put the date next to it so we could go back and know what we had done.
When we were making the list I put "build a treehouse" on the list and it was a bit of a joke. I do think that one of the next visits mom makes will include a treehouse building project though - we just have to find a tree to use in the yard!
Some of the things we decided not to do on this trip and other things we added. I laugh that we put "possibly, maybe fun" and then put dates next to it! I would like to say that we did actually have fun on more than three occasions.﻿
Some things took longer than others, for instance we were doing a LOT of laundry. The laundry had backed up because the drier died and as we were working on catching up the washer sprung a SEVERE leak. It seemed as though every project we started required making adjustments of some kind or another. For as many projects we had there was a greater amount of adjustments made. Partially that has to do with the old house we live in, but MOSTLY it has to do with having Max and CJ around. Holy Moley do they ever require a lot of supervision.

We would be in the middle of putting something together and we would turn around and parts of it had "walked away". Putting together the trampoline is the perfect example of this. We had pieces we needed to fit together. We were bringing  them all to one spot to lay them all out. As fast as we could lay them out pieces were disappearing. It took two of us to put the pieces together and the third of us to chase the boys around gathering things back. I made the mistake of putting things together but not screwing them in (step two on the list of directions) and so we had to go all the way back to step two when we reached step ten and realized we couldn't progress if the pieces weren't screwed.

I have to say the tramp was one of the best things we did - I have a few favorites - the trampoline is absolutely in my top three of the things we did.  We managed to get it together (with only one small missing piece which I still have to order) and we spent a LOT of time on it.

Gramma made awesome memories with the boys jumping with them on the tramp. She is sassy though - she tries to double bounce me!
Posted by JCB at 5:02 PM