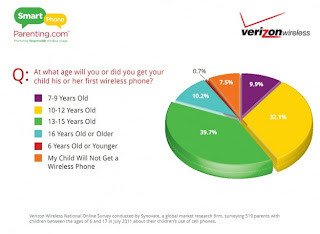 There's been a lot in the news and in conversations I've heard lately about kids and technology, more specifically about kids and cell phones. A friend of mine made the comment on facebook "I know several people who couldn't raise their kids without technology!"

I got the information above from a verizon website and I thought it was interesting.

On Monday Maxies school bus broke down before it got to our house. We went to look for it after calling the neighbours and finding out their daughter had been picked up already and we found them down the road. The wind was howling, the temperature was around -26 degrees C and the kids were getting cold waiting for a replacement bus. I offered to the bus driver to let the kids come sit in the van and warm up. She asked them if they wanted to and they all did. They climbed in and I turned the heat on high. Out of the 5 kids that came into the van (all younger than high school) 2 of them were texting the whole time and 2 other playing with an i-pod. (they were all polite and very happy to be warm) but it got me thinking about how we use technology in our home.

We have 2 televisions in the house and both have PVR. I like to watch television without commercials and it is nice to be able to record television shows without having to keep track of video tapes. The boys have NEVER been good "sit down and watch a tv show" kind of kid but now they like Scooby Doo, Inspector Gadget and most recently Max asked to watch the Magic School Bus. CJ will pay more attention to the television but unfortunately (for me) neither of them will just sit down and watch something from beginning to end and so I end up watching most of the kids shows that we put on the t.v.

The last time we were in the hospital at outpatients ( I feel as though we go once a month) they had us in a small waiting room with a television and CJ was quite disgusted that I could not fast forward through the commercials. He thinks every television has a PVR!
Shel went with Max on a class trip to the firestation and something about Star Wars was mentioned. She said all the kindergarten kids (but ours) knew who the Star Wars characters were. She felt a bit guilty about that so she stopped at the video store and rented some movies. As it turned out the boys were not interested in them at all and we just ended up paying late fees on the one we left in the dvd player when I returned them!

Shel and I BOTH have i-phones. We both have games downloaded for the boys to play and both boys know how to use the phones. The other morning I noticed that CJ had used my phone to take a picture of his poop. When I went to delete the photo I found that he had not only taken one picture, but SIXTEEN pictures of his poop. What can I say, he's proud.

We have used the phones to let the boys watch movies on netflix when we drove to Edmonton and we have used them to occupy the boys while we waited for appointments. Max knows how to find netflix, find a movie he wants and play it. Sure there was a time when kids waiting for appointments had magazines and toys to play with (in doctors offices) but for the most part those things don't exist anymore, and to be honest I would rather my kids  played with my phone than with the toys other sick kids had played with.

CJ (who is 3) knows how to go to youtube and look in the history for the motocross videos he likes and play them.

Could I raise my kids without technology? I'm sure I could, but why? I think I need to teach them MORE though, because right now they know enough to be dangerous. This morning CJ deleted a game I have been playing on my phone for a few months. DANG that kid! It made me think of what I can live without. I won't add that game again ... and I'll have time to find others!
Posted by JCB at 1:54 PM

I am a strong believer that technology not only makes the learning process much more fun, but it also creates allows a more hands-on experience for kids! If you are interested in other educational products for kids, I would check out our educational apps! :)