Doors ... and then the water pump

We have been living in our house for a few years now. To be sure it is a bit small to be "ideal" for us - especially since the introduction of Great Dane Hugo to our household two years ago.
There are many, many things which need to be repaired and upgraded on the house and although it sometimes feels as though we are not moving forward on any of these projects we do sometimes make small improvements.

At the moment we are in desperate need of TWO new exterior doors.

Both doors are made from wood and neither is insulated. One problem with the house being as old as it is is the fact that nothing is "standard". The doors are not standard doors. In fact, the back door is so short, it is impossible to find a replacement by walking into a store or to a "used" lot to find a replacement.
The screws holding the door into the frame have become stripped and completely pulled out of the wall on the top hinge and the door "flops" around. in addition to the flopping problem, it is impossible to put any kind of weather stripping around the door to stop the wind, rain, and snow from coming in because the door simply does not fit the hole that was made for it.

The front door is a hollow wood door with a piece of glass in the middle. The glass has fallen down into the door and now there is a hollow door with a hole to the outside which I have covered with duct tape to prevent the majority of the air from coming in. If I sit on the couch in the corner by the front door the wind will literally blow my hair!

Every time it rains we have to pile towels at the base of the door to mop up all the water that pours in underneath. It has been our intention to replace the front door before winter and to try to at least fix the back door until we can come up with a more permanent solution at the back entrance.

We have been trying and trying to get someone to come and help us make repairs for months. Literally months. We live in such a small town it is impossible to find a contractor who is willing to work on a project so small. In the entrance to the grocery store, the drug store and in the town paper there are fliers advertising people who are willing to work on small house projects. We have called these people. One is booked "for months", one has not replied, one came out and apparently worked on the back door, but it is not fixed?!

I am getting desperate. I asked the maintenance man who works with me if there was anyway he could come out to the house, measure what we needed for the front door, come with me to buy a door and install it. I KNOW it will turn into a larger project than simply pulling the old door out and putting the new door in. I know it is beyond my capabilities.
He said he would help. He said he would measure and we put together a plan for him to come out this weekend. At the last minute on Friday he came to me with this: 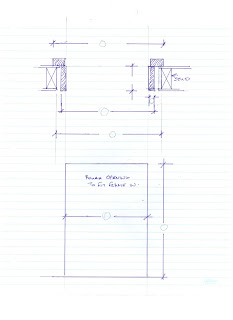 It is a sheet of paper on which he would like me to measure and insert lengths to save him some time.
ACK! I absolutely do NOT want to do this. Have I mentioned this house is old? I can GUARANTEE that the numbers I measure will leave him shaking his head and he will want to measure again to make sure I have done it correctly. I JUST WANT SOMEONE TO HELP ME !

We stuck with the plan to have him come and help with the door on Saturday , and I (quietly) planned to let him measure what he needed anyway!

On Friday night I went to bed. All was well. In the middle of the night the toilet made a terrible gurgling noise and all of a sudden.... we had no water!

The house was silent, which is a bad thing. I went to the basement to check on the water pump. There was power to the pump but no water pressure. This I know is a bad thing.

We get water right into the house from the springs so we don't need a cistern or to haul water which I LOVE. There was water in the tank. I don't know enough about the system, but I know when it is not working. This is not OUR pump - but it is what our system looks like.

Saturday morning first thing I called the plumber. I told him what I knew and that we needed some help. He wanted me to check a few things and so I was taking instructions from him on his cell, which was cutting out, laying the phone down upstairs because there is no reception in the basement, and trekking up and down the stairs with the boys and dogs in my way the whole time to check on what he was asking. Still no water pressure. After many calls he said he would send someone out to check it. He did ask me if I knew it was a weekend and the call out cost was higher than normal. I did know this and unfortunately we cannot live without water and so we needed to pay whatever it cost to get it repaired.

I took the boys to swimming lessons, (where I made them shower twice!) and the plumber came out and fixed the switch. I was hugely relieved it was the switch that needed replacement and not the entire tank, but my plans to get a door this weekend just went out the window.

So today we have a pump and water that works, two doors that STILL need repair, and it is the second weekend in October.

I sure as heck hope I can figure out what to do with the doors before the snow flies and the water lines in the house freeze because there is no front door!
Posted by JCB at 11:25 AM