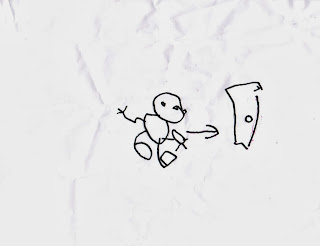 I did the most UNTHINKABLE thing a parent could do - I  locked the bathroom door. I don't always, in fact, I NEVER lock the door, because the fights that ensue outside the door as everyone in the house tries to enter the locked door are unbearable. There's a child radar that goes off when a mother enters a bathroom and shuts the door. It alerts every child, and in our house, every animal, within 500 yards and they all come charging in to see what is the matter and to demand entry. For the MOST part, it is safer and quicker and quieter to leave the door open, sneak in and get out as fast as possible before anyone comes running.
I don't know why I decided to lock the door, but I did. The kids were all in bed asleep, but I KNEW, I KNEW, that the child radar would wake at least one of them. I threw caution to the wind and did it anyway.
I shut the door as quietly as possible, I turned the lock as quietly as possible. I undressed in complete silence and turned on the water. I stepped in and stood with my head under the scalding water and thought I was home free. Then came the knock. I heard it, but I pretended I didn't. I took an almost glorious HOT shower, but I felt guilty knowing one of my cherubs was out in the hallway, bereft without access to the bathroom and his mom. (He had another mother close by, but mother in the bathroom trumps mother in the bedroom.) I got out and grabbed a towel and saw a folded note being pushed under the door.
I was apparently in the shower long enough for my five year old, distraught at being ignored as he knocked, had time to "write" me a note.
I hate to say it but it's true - locking the door was worth it - just for this note.

My tabby, Morgan, never lets me go to the washroom alone!