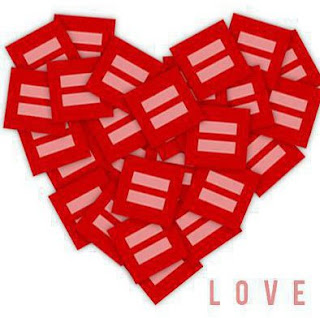 If you are a friend on mine on facebook you will notice that my status photo has changed this week.
That's because I support equal rights.
Here's an article from Time Magazine explaining more on this change you may have noticed on facebook (and other social media)- ﻿
From Time Magazine:

That’s because the Human Rights Campaign, which advocates equal rights for lesbian, gay, bisexual and transgender people, has been promoting an image of a pink equal sign over a red background in lieu of its Blue and Yellow Logo to mobilize supporters online as the Supreme Court begins hearings on gay marriage today in Washington. A symbol of equality, the photo has racked up more than 25,000 likes and 78,000 shares on the group’s Facebook page in the past 24 hours. In fact, Mashable reports that since actor George Takei  changed his profile picture to the red equal sign, the post has received more than 40,000 likes from fans.

Today, the court is deliberating California’s Proposition 8, which bans the right for same-sex couples to marry. Tomorrow, arguments will be heard regarding the national Defense of Marriage Act, which has legally defined marriage as a union between a man and a woman since 1996.

While the court’s favorability rating is at an all-time low, some supporters have taken to social media to add to the weight of public opinion. On Twitter — where Supreme Court ranks in the top 10 in the world’s trending list — supporters like actress Sophia Bush have changed their icons to the equal sign.

There has been some criticism of this trend, and comments from people saying sarcastically that they are sure the justices are tallying up the number of facebook status changes right now. HELLO!!!!
THAT IS NOT THE POINT.

Of course the justices are not tallying up the number of statuses and I don't care if they don't. What I care about is MY friends, MY acquaintances, knowing that I support equality. I have had a friend ask me what it meant and I shared with her. She had no idea and would not have if I had not changed my status to red.

I am a pretty "a-political person". Aside of being very vocal about the importance of voting I avoid talking about or posting anything , (or RARELY posting anything) political on my facebook status. I have friends and family who are VERY political and some who post numerous times a day, every day, on political topics. I avoid engaging in conversations with these people because I don't believe facebook is a platform where I am likely to be heard or be able to completely and accurately explain or defend my position. BUT. I believe in human rights, more specifically I believe in LGBT rights. I think it is WAYYYYYYYYY past time that the USA recognized their gay citizens as EQUAL citizens. So I am keeping my red status for now, regardless of whether people think it is pointless or that I am on some bandwagon, or WHATEVER they think.

The ruling of the supreme court is not due until sometime in June. I can guarantee on the day the ruling is handed down my facebook status WILL have something to say. SO if you think I am being political just now? Oh, wait.
Posted by JCB at 3:00 PM

I agree whole-heartedly with you that the profile picture movement on Facebook is worthwhile. I'm a non-Facebook user, but I think that it's a fantastic way to communicate the message of equality. Where I live, it's easy for a lot of uber-conservatives to pretend they are in a community where "here...we all believe this way." To see these people in utter confusion as they see their friend list flooded in red, well...it's a beautiful thing. I think it really makes people think things through, and hopefully starts some (productive) dialogue.

Good for you for showing your colors! If standing on the side of love is a bandwagon, I'll jump on apologetically!

That is UNapologetically! Damn Autocorrect! :)