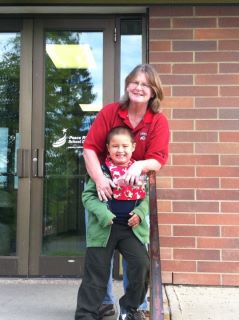 So here we are!
Max had his first day today, an orientation day and not a full day. He will be attending the school in town. We deliberated and deliberated and FINALLY decided to send him to the community school and then received a call from the school letting us know that enrollment was so low that the school would not likely stay open and we would end up having to move Max again if he went there this year.
For Max to move twice would be too much and so we decided to keep him where he has been going - the school in town. We are sad that the community school has such low enrollment and we know that choosing to put Max into school in town also affects this enrollment, but we have to do the best thing for him. We are happy with our decision. Max has the aide this year that has worked with him for the past two  years. He will be getting speech therapy, Occupational therapy and physical therapy AND going to kindergarten.
YAY!
He took the bus this morning and Shel went with him on his first day. It is about an hour bus ride and he will take his DSI to play games on the ride. He was reluctant to get onto the bus but Hugo was excited and climbed right on the bus behind him. The other kids on the bus thought it was hilarious. I was so busy pulling Hugo off that I neglected to get a photo of the great dane on the bus.
My baby is in Kindergarten. 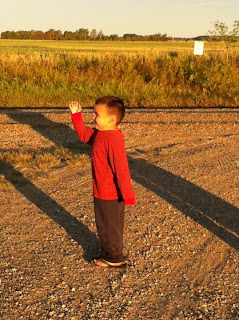 Here is Cael waving at the bus as it arrives. Max was behind him clinging to mom and crying. CJ was thrilled and HAPPILY would have gone. We will see if he is still thrilled in two years when it is his turn.

At one point I said to Max that he would be taking the bus for the next 13 years. Upon reflection I son't think it was the most motivating thing I could have come up with to tell him. He has not slept at night since last week in anticipation of school beginning. We have been talking to him about it trying to prepare him but it was too overwhelming so we really downplayed it the last couple of days to try and "ease" him into it more and not build it up so much. When I got him up this morning he started to cry immediately and said he did not want to go on the bus. It was really the first he had mentioned the bus, but the bus driver let Shel ride with him which helped immensely. Hopefully tomorrow it will all go smoothly.

Hope the first day jitters are over and tomorrow morning is a little bit easier.

Hope the rest of his week was good!